For the past week, I’ve been spazzing like a two-year old. I’ve been distraught, frantic, and furious. I’ve been wired to the to the point where I can’t sleep; I can’t concentrate at work. I’ve been suffering from overwhelming angst when dealing with everyday life. Because of these traumatic symptoms, I’m tapped out, emptied, and broken. After decades of rolling with the punches, I finally stood-up, lashed out and took a stand for myself: I refused to be labeled a faggot. And the aftermath was brutal.

After reconnecting with an old friend from elementary school, I experienced a divine-like revelation: I can easily trace my insecurities, lack of self-worth and lack of sell-respect all the way back to 5th-grade gym class. It was crystal clear. It was powerful. It was liberating. Because I was skinny, awkward, and unable to hit a baseball or catch a football, the coach made it obvious to all that I wasn’t good enough. Many of the so-called cool kids quickly jumped on board and formed the cool-kid-clique. I was quickly segregated and branded with a new identity I didn’t understand; faggot. With zero resistance from the staff at the school, the bullying began, and the label stuck. I became the subject of gay jokes, sexual innuendos, and cruel torments. Faggot.

By the time I reached middle-school, the intimidation intensified. Not only was I the last person to be picked for the team, which was humiliating enough, but the cool kids would terrorize me daily. I was punched, spit on, and ridiculed. Meanwhile, I justified it; I knew I was different from everyone else. I was caring, sensitive, and openly displayed my emotions. At its worst, I skipped gym class for several weeks to avoid the brutal torments. Eventually, the school caught up with me and sentenced me to outside counseling – solidifying, in my mind, that I was the problem. The bullying was never addressed. Meanwhile, things weren’t much better at home. My older brother waged daily tortures against me with his High School wrestling moves. “Little faggot” was his favorite catch phrase. Faggot.

Although the intimidation finally subsided as I got older, the deep-rooted trauma continued to ring throughout High School, young adulthood and deep into my 40s. To cope, I took pride in a creating a carefully crafted façade. I forged a confident persona, I married the right person, and I successfully established myself in an awesome career. Meanwhile, the long-branded stigma buried itself deeper than ever. Faggot.

In recent years, after becoming acquainted with a group of my wife’s online friends, the familiar intimidation was resurrected all over again. Because I openly classified myself as metrosexual in a public forum, I was once again forced to tolerate gay jokes, sexual innuendos, and cruel torments. I admit, there were times where I openly chummed their brutality at my own expense. I played along, laughed it off, while I valiantly wore my bravest face. After all, they were only teasing, right? Faggot.

Finally, I had enough. Making full use of my powerful, new-found revelation, I finally stood up once and for all and posted the following comment for the world to see: 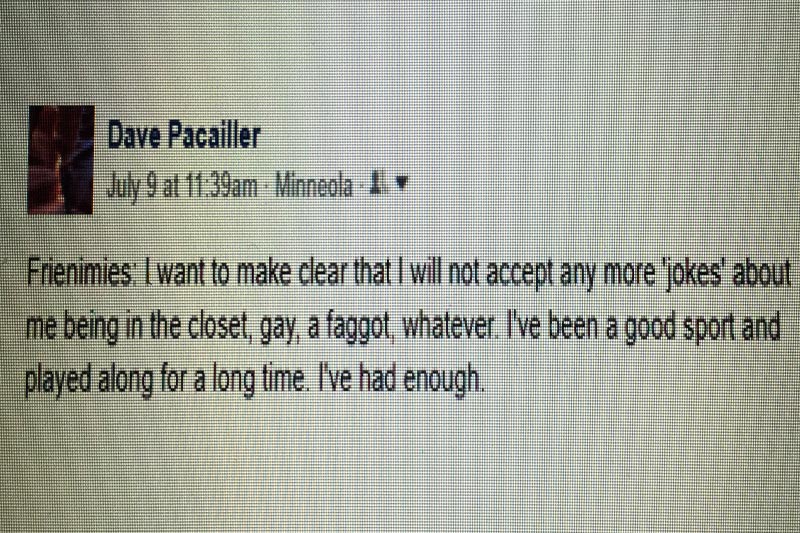 Although I received support from many, I immediately received a private message directly challenging my unexpected stand:

I don’t believe you should be telling everyone on your friend’s list that someone or someones used a negative epithet when that didn’t happen…it does not give you leave to tell a falsehood about what others did.

Falsehood? I admit I may not have been called me faggot by name. But for me, this was no falsehood. Loud and clear, faggot is what I hear every time a gay stereotype is used at my expense. Faggot. Faggot. FAGGOT.

I’ve been thrown under the bus so many times regarding my own sexuality I made a point; I’m sorry my post didn’t meet your standards. After all, it’s my post.

After I had clicked send, the unexpected onslaught of vicious brutality was fired upon me from all angles. The keyboard courage from my combaters was ruthless. Although I deleted, blocked and removed these toxic people from my life, the emotional pain swiftly placed me right back into 5th-grade gym class. Decades of suppressed rage unleashed its wild fury. While I may have finally stood up, kicked, punched, and screamed, the aftershocks of my courage took a huge emotional toll that left me tapped out, emptied, and broken. Faggot.

The raw emotions continue to be painful. I’m still spazzing. I’m still distraught. I’m still frantic and furious. I’m working hard to shed this baggage and the image that has been branded upon me. Meanwhile, I am damaged. Mentally and physically, I am unable to cope on my own. I need support. I need help. I need an advocate.

I finally understand what it means to be a survivor. I must find my footing, pave my way, and mow over the resistance. Even if I’m all alone, I fully intend to fight for my self-worth for as long as it takes.