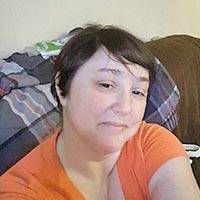 My name is Jennifer and I’m battling CRPS on my right side of my body.  CRPS, commonly known as the suicide disease because of it’s intense pain levels, not only changed my life for the worse, but has affected my husband and children. It all started on Oct. 15th, 2010 about 2 months after I married my husband; my best friend and partner in life.

I had just started working at Wells Fargo. I really enjoyed helping customers with their accounts and other banking issues. I loved my office and coworkers, plus not having the stress of how I was going to pay the bills or support my family looming over my head, was nice too.

My children never asked for anything. I was never late on the bills. We were able to have 2 cars, a nice house, and financial security. It was the American dream coming to life.

Then one day I was working with a customer on the phone and my hands started to get a weird feeling. They felt like they were falling asleep, you know that tingling feeling we all get, then it was followed by a numbing sensation. I started having strange pains with temperature changes too. The pain would go away and come back, off and on randomly.

I didn’t think it was a big deal right away. I thought it might be the way I was using my keyboard, maybe it was cutting off my circulation at my wrist or something. I tried changing positions when I typed but I was still going through bottles of Tylenol and Advil each week.

Then one day I was talking with my boss while pouring a cup of coffee. I was holding the coffee carafe with the handle, as normal, and it just slipped right out of my hand. I screamed out like I was being killed because the pain was so intense.  They sent me home. I went to a doctor. I saw many, but none could tell me what was going on.

For the first time in my life, I was afraid that I wouldn’t be the same again.  My right hand had lost all its feeling, my ring finger and pinky finger were both curling under in pain.  My arm and shoulder were very sensitive to the lightest touch. I couldn’t even let water touch my right arm, hand, or shoulder.

The Doctors couldn’t figure what was wrong with me. They had me go through months of physical therapy. They also had me doing one procedure after another, such as EMGs, bone scans, and Nero stimulation.  Let’s not forget all the different medicines that they’ve had me take to try and stop the insane pain that can only be described as stabbing, throbbing, burning, tingling and sometimes numbing.

No one could get it to stop.  No one could help me.  I felt like the Doctors didn’t care and didn’t want to help me.

Now I was stuck.  My husband had to do everything for me because it was too painful for me to do anything on my own. Having the man you love do everything from shaving your legs, to helping me with my period was awful.  I couldn’t even put socks on my feet because they would swell so much that I just wanted to rip them off. This was the worst thing that I had ever been through.

Why should anyone have to be plagued with something that has no cure?

After seeing many doctors, it wasn’t until I went to St. Luke’s Orthopedics that someone finally recognized the symptoms. I didn’t realize then that what the doctor was about to tell me would change my life and I would never ever be the same again.

The diagnosis was CRPS. The Doctor said if I had been diagnosed earlier, I could have been helped and possibly have gone into remission. Unfortunately, it was too far gone for that now. I was stuck with CRPS for the rest of my life.

I shut down, my mind stopped processing the words he was saying, my heart broke and I felt like I was going to die and leave my family.

Thankfully, the workman’s comp representative  came to every appointment with me . She went back and told her supervisor the diagnosis and they continued to pay me for awhile.

Then payments started to stop, my meds were being denied, the Nero stimulator, that would have helped me more than anything else at that time, was also denied. I felt my only option was to find an attorney to help me fight for my rights . After an arduous battle, the day finally came when I was told I needed to resign from the job I loved, to win the case and go on full social security disability.

I was left to deal with all the pain, bills, copays, and find a doctor who will take my new Medicare insurance.  It took months of searching for a CRPS/RSD doctor but I finally found one.

I thought if I focused on helping others, I would forget about my pain.

I started a nonprofit organization where I breed dogs to be trained as therapy, educational and emotional support for others who were living with the same condition as am. I want people who were going through this to have a companion to help them with the dark times.

November is National CRPS Awareness month. I fought long and hard to get a proclamation for CRPS/RSD from the state of Pennsylvania. This Proclamation allows CRPS sufferers voices to be heard and helps us spread awareness. I will also be going to Harrisburg, Pa to talk about CRPS/RSD and raise awareness.

I am asking everyone to join my fight to help spread awareness, and fight for a cure so that CRPS sufferers can have our normal lives back.

I want to thank you for reading my story. I hope that this has helped someone realize that we all need to yell, scream and fight for CRPS/RSD cure and awareness.