I am the oldest of three children.

My brother Danny is a year younger than me, and we grew up, mostly, as tight comrades. We were a moderately happy family of evenly numbered four. I love even numbers. When I turn up the television volume, it must be by an even number. When I count out my meds, it’s always two-by-two. A Noah’s Ark of pills. Driving in our Chevy, two parents sat in the front, and two kids sat in the back. Familial harmony in the key of four.

Six years after me, my youngest brother Michael was born, and our even-numbered four became our odd-numbered five. My astute mother once told me not to have three children, but to have two, because, with three, there was always an Odd One Out. There it is again. Even and odd.

When Michael first came home from the hospital, six-year-old me took care of him as if he was my baby. I would never let him cry, fed him bottles, and dressed him like one of my dolls. As he learned to talk, he adorably called me Ri Ri because he couldn’t pronounce Dori.

At three years old, Michael decided he wanted his real mother and began clinging to our mom like a little koala bear. If she sat down in a chair, he was right there with her, claiming her lap as his favored child place. This was okay with Danny and me as we still remained our unit of two and were too old to sit in laps. Two and one. Odd One Out.

That Christmas, Michael became enamored of the carol Little Drummer Boy and endlessly asked my mother to sing it to him. They were a sweet little vignette. Son snuggling with his mom while she sang to him in her off-key voice. Michael would join in with a few pa-rum-pum-pums in his high little boy voice.

Now, many decades later, I hear the song Little Drummer Boy and, as music often does, it brings me back to those nostalgic times when our family life was warm and simple, and little boys cozied up with their mommas. We were an odd-numbered band of five.

Not long afterward, my mom decided that she no longer wanted stay-at-home status and went to work and later returned to university. Her driven efforts at a career suited her much better than housework. This is around the time when my mother’s even/odd theory of two vs. three children became true. As we got older, the sibling dynamic became fluid. Danny and me vs. younger brother Michael, or Danny and Michael, joined together as brothers sans sister. Odd One Out.

In spite of these ever-changing sibling relationships growing up, I remained my baby brother’s devoted protector.

When Michael turned six years old, all three of us were in school together at St. Theresa in Phoenix. I was a tenured Catholic school girl by the time Michael joined Danny and me. I knew the ins and outs of being taught by and getting along with the Sisters of Charity of Seton Hill. I knew who would tolerate my rogue behavior and how to avoid the disciplinarian principal. I faithfully believed that all of the nuns were perfect teachers, counselors, and sometimes friends. 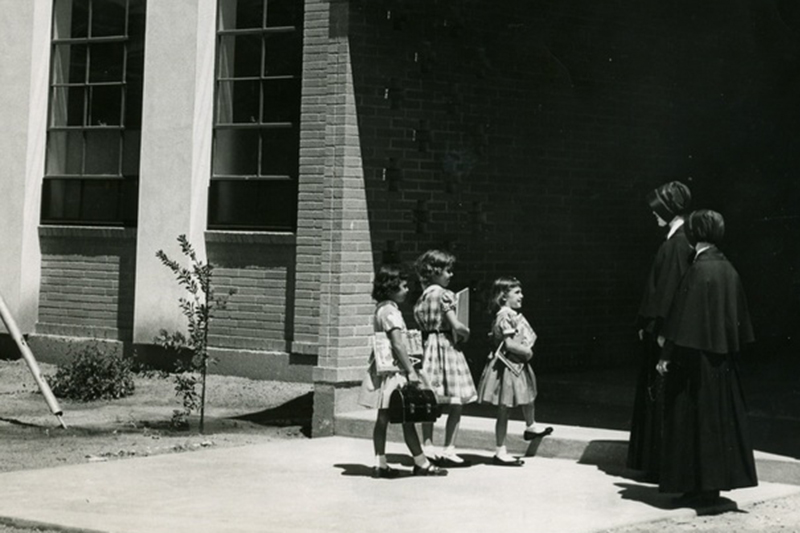 But those beliefs were shattered when I was 13 years old. In seventh grade at St. Theresa, I was called out of class and instructed to go to my little brother Michael’s classroom. I remember worrying that he might be sick or that something was wrong.

Something was wrong. Very wrong.

When I walked into the second-grade classroom, Michael’s arm was being twisted by, let’s call her Sister Mary Maleficent, and I could see he was trying hard not to cry. The entire class bore silent witness as the nun continued to wrench his arm while railing to me that my brother was not behaving in class. I stood in shocked, muted horror. In retrospect, I should have cold-cocked her. I walked back to class in a stunned fog.

In today’s world, this Something Wrong would be called out for what it was. Child abuse. Abuse by an adult with power over a young child.

As soon as school ended at 3:30, my brothers and I walked home. The minute I walked into the house, I called my mom at work and reported what had happened earlier at school. I had no idea of the gravitas of the situation until much later. Maybe even years later. My mother came home from work immediately and called my father. I knew the Something Wrong was big, and by night it had grown into an Epic Wrong. She called the St. Theresa School principal and made an appointment with her after my father came home from work.

This happened enough years ago that I don’t remember every small detail, but I do remember the wrath of my mother. God help the person, place, or thing on the receiving end of her temper. This is the woman who once threw an armful of socks across the JCPenney shoe department over what she believed was unacceptable customer service.

But this wasn’t about a slow-moving line of people waiting to pay. This was about an incensed, enraged, and using-language-peppered-by-the F-word mother lion protecting her injured cub.

My mother, father, and I met the principal at their convent. To my dismay, my mother insisted I come with them to repeat my first-hand account of what had happened. We entered the convent and my parents were shown into a common area room. At the same time the offending nun, Sister Mary Maleficent, was instructed to show me into a smaller room. As she led me in and turned on the light, she hissed at me,

I did not have a problem with this memory of my appalled fear. This threat was from a nun. Allegedly a role model for the children for which she was responsible. I questioned myself if I had even heard her correctly. But I had.

In the end, no resolution was reached that satisfied my mother. My mom may have left us when she decided to work outside of our home, but that did not mean that she would ever tolerate the unimaginable wrong of hurting her children. Injustice, meet my mother.

My sweet little brother, who so loved to sing his pa-rum-pum-pums to Little Drummer Boy, was literally beaten by a nun and humiliated in front of his second-grade class. My mother made sure that he never set foot in St. Theresa School again. For good measure and to pound her point home, my mother also took Danny out of school. My parents decided that I would finish my final grade school year at St. Theresa, much to the chagrin of my teenaged will. My brothers began attending a public school in our neighborhood.

This milestone marked the end of the parochial school era and the official beginning of my mother, the iconoclast.

When I think back about this unimaginable story, I still feel deep guilt that maybe I should have done more when it happened. Perhaps I should have slammed her up against a wall or twisted her arm. I knew that good Catholic girls did not act this way, although this fact does not assuage my guilt. Catholic guilt. The super infused stays-with-you-for-life kind of guilt.

As an adult, I learned that physical abuse of children was not an isolated occurrence at St. Theresa. It was another widespread embarrassment of the Roman Catholic Church. For many years, victims of child-abusing nuns have repeatedly urged for recognition of their abuse and status within the church, just as victims of sexual abuse are recognized. I do not know if my brother even remembers the trauma of what happened to him or the reason why one day he woke up and went to a different school. I pray this incident did not impact the wonderful man and father he has become who now sings Little Drummer Boy to his own son.

“A lot of attention has been given over to the Catholic Churches’ sexual abuse of children
in their care, but this attention seems to have been hijacked by the media and
has overshadowed the many thousands of victims that endured physical abuse.”
― Stephen Richards

As for me, I am conflicted by the fact that I am a parochial school-educated, sometimes participating, member of a faith with a history of heinous crimes against children that continues to be covered up and not brought to accountability or justice.

But in spite of everything, this much I know. Sometimes the power of Odd One Out does not always prove true. Because now we three continue life together as a singular caring and protective family with no one ever left out. We are familial harmony in the key of three.