The curtain rises slowly to reveal the spring and show set. The water is crystal clear (1.7 million gallons a day of 99.7% pure spring water). The musical production of Hans Christian Anderson’s The Little Mermaid is about to begin.

Parents are telling kids to sit still and shut up, and the music for the first number kicks in. Three mermaids sing (lip-synch—an art form perfected by Britney Spears many years ago) and perform an intricate synchronized water ballet. They stop to sip air during breaks in the musical vocals and speaking parts. Costumes are brilliantly colored. Effects are cool—bubble walls and the natural springhead rock formations. During the winter months, manatees join the show.

In the late 1940’s scuba diver, entrepreneur, and all-around fun guy Newton Perry turned the Mermaid fantasy into kitsch, when he opened Weeki Wachee, Spring of The Mermaids. He built an 18 seat glass-fronted theater overlooking the head of the deepest spring in North America (it now seats 500). Back then the mermaids performed in several shows daily using breathing hoses placed strategically in the performing area. Newt’s background in training U.S. Navy frogmen gave him the skills needed to take pretty girls right off the bus from Kansas, or wherever–and turn them into performance artists in a totally foreign element: underwater.

By the 1950’s, Weeki Wachee was one of the hottest tourist attractions in the country. It was a time in Florida’s history when weirdness ruled.

Before Disney World and SUV’s, the average family wasn’t able to travel by air. This was heaven on earth for ticked-off and stressed-out parents traveling cross-country in the station wagon with the four whining, fighting, hot and sweaty kids. The place was hot stuff. Elvis, Esther Williams, and Don Knotts were just a few of the celebs who frequented the park.

For this article, I traveled to Weeki Wachee, Florida where I was lucky enough to be able to hang out with the Weeki Wachee mermaids and my buddy, Andrew Brusso for a few days. Andrew is an old friend and a noteworthy and talented photographer. He moved back to Florida a few years ago after a 25-year stint working in NYC. He works full time when he isn’t traveling as a volunteer. He has quite an impressive body of work—multiple covers of Newsweek (including the John Glenn cover), Entertainment Weekly, People Magazine, to name a few, and celebrity portraits too numerous to mention. Andrew has always had an affinity for bizarre and surreal concepts and sets. He also has an uncanny ability to bring out a person’s quirks and inherent eccentricities, whether a celebrity or me (see featured image). 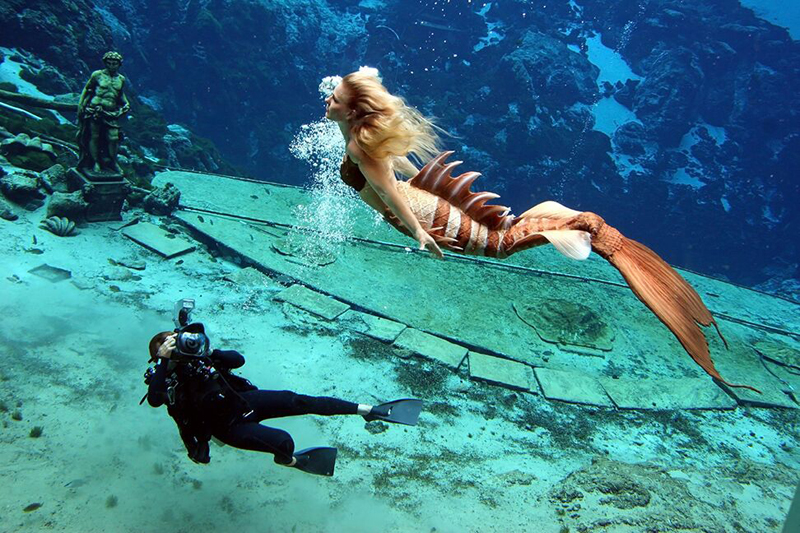 At the time of my visit, Andrew was hard at work putting together photo shoots between shows for the new calendar. Andrew’s Weeki Wachee Mermaid Calendar is killer and one of the major fund-raising sources for Weeki Wachee. With his real affinity for things bigger-than-life and the avant-garde—shooting the Weeki Wachee Annual Mermaid Calendar is a no-brainer. He also shoots their promotional and advertising shots, and the TV location shoots. He digs in to help with events and general day to day operations.

A BRIEF HISTORY OF WEEKI WACHEE:
Andrew met me at the front gate. We said hey and walked to the administrative offices where I was introduced to John. He was very welcoming, and he loves his work. It shows. He and Andrew gave me a brief history of the park. Over the years, the park had had several private owners, including ABC Networks, in the ‘50’s and ‘60’s. At the end of the park’s string of private owners, it was tired and rundown. It was nearing extinction. It was no longer a moneymaker. Interstate highways bypassed the town and Disney and Universal are pretty tough competition. Local support only goes so far.

The incorporated town of Weeki Wachee has eight residents according to the U.S. Census, with no change in population since 2000.

Being a landmark and an icon of Americana, a dedicated group of people with a love of Weeki Wachee took on the daunting task of lobbying the State of Florida to buy the property and make it a part of the State Parks Division. Thanks to  John Athanason, Robyn Anderson, and Andrew’s work (as well as many others), Weeki Wachee became a State Park in 2008. John is currently Marketing and Public Relations Manager, and Robyn is Assistant Park Manager.

STATE PARK STATUS:
Now, with State Park status, Weeki Wachee’s future is bright. It has the highest gross revenues of all of the state parks, but also hefty operating expenses. State funds are disbursed on a slice of the whole pie basis, and not according to the percentage of income produced as a single property within the State system. So, additional fundraising is needed every year to keep things rolling, maintaining, and improving.

SO, BACK TO MY VISIT…
I was given full access to the behind-the-scenes backstage magic. BIG FUN. These young women are not only lovely and warm individuals but also poised and serious athletes. They have a few male cast members also–handsome devils and very mellow.

Andrew is in scuba gear with an underwater camera set-up that’s about the same price as a slightly used Lexus. Each shoot entails the review of hundreds of images, and then digital editing on the final picks to reach the desired look and feel. He is also scrambling to get a location shoot together for one of the network reality shows. All of this as a volunteer …

As the show was about to start in the theater. Andrew and I walked over and went through the “Mermaids Only” entrance. I felt special. We went through the final dressing room where the cast were getting into costume. They already had the full waterproof stage makeup and were putting on swim fins and pulling on their tails. The room is heated–even during the summer. The spring’s temperature is in the low ‘70’s year round. Spending an hour at a time in that water when your body temp is 98.6F is a physical challenge. As soon as the cast comes out of the water, they need to warm up.

Backstage, I noticed a hole in the floor with a 17-foot tube going straight down, where they begin their journey to their underwater stage. They first go down the ladder inside the tube.  Then they swim 63 feet through a tunnel that has strategically placed air hoses. They end up in the spring to the far left of the audience where they ‘magically appear’ when they are cued, either from stage left, or below, from the main spring vent. There is also an airlock on the edge of the spring head where cast members wait between scenes.

On to the control room, which is submerged near the mouth of the entry tunnel. From here I can see the entire spring head and performance area. It houses controls for lighting and special effects (bubble walls, platforms, etc.). It’s the communication hub with the performers. The cast and control engineer communicate easily with no electronics other than an intercom designed for underwater acoustics.

The Ins and Outs of Mermaid Training

OK—so divers out there: Consider this. You are spending an hour in water over 20 degrees lower than your core body temperature, with no wetsuit. You are in fresh water (without buoyancy) without a BC (buoyancy compensator) or weight belt. The only way you can regulate your depth is through intake of compressed air and releasing bubbles slowly until you reach your desired level. You don’t have the air on your back. You have to swim for it. You have no goggles or mask, so your vision is limited. The air hoses have a valve you trip when you bring it to your mouth. There is no bubble trail to lead you to the hose.

Now while you are doing this, you have to perform ballet and modern dance moves, lip-synch to the music and your lines, be in your places when cued, and concentrate on relaxing your face muscles and smiling. This is serious and impressive stuff.

Of particular interest to me was the final test the mermaids went through in their training before graduating. They were required to swim down into the spring, to a ledge 117 feet deep, trailing an air hose. Then, leaving the air hose and swimming to the surface in one breath. Ok. That’s the height of a 10-story building. Makes me hyperventilate just thinking about it. They had other divers at varying depths with air in the event of an emergency, but no dive, no certificate … This is still the final feat for full mermaid status today.

We entered the theater where 500 people were seated. Kids excited and squirming in their seats and about half of the adults trying not to roll their eyes, thinking, come on already. You’re killing me here. I can’t believe I’m doing this. Then they look at the kids and give a half-assed smile and check their watches.

After the show begins, I look around again and notice that the once bored eye-rolling parents are now mesmerized, just like the kids. The show goes on to its conclusion to a roar of applause. The cast can clearly see the audience, so there is a personal interaction. Mermaids and mermen swim back into the tunnel, up the stairs, dump the costumes, and wrap up in warm towels. Cold.

THE MERMAIDS:
I had an opportunity to sit down for an informal chat with two of the mermaids, Chelsea and Fiona. Chelsea is in her third year of full mermaid status. She was not a diver before Weeki Wachee. She auditioned at the suggestion of friends. In the beginning, the hardest thing for her was the choreography, but now she teaches choreography. Thanks to her training at Weeki Wachee, she also performs internationally in salt water aquarium attractions, swimming with rays, sharks, eels, and her favorite: the whale shark. She has appeared on TV and is featured in the annual calendar.

Fiona is about to take her mermaid test, moving up from novice status. She has a distinction unlike any other mermaid at Weeki Wachee. Her great aunts were mermaids in the 1960’s. Those aunts performed for Elvis, among others and began teaching Fiona moves in a swimming pool from the time she learned to swim. That must be why she nailed her first open audition. It’s in her genes. For Fiona to pass her mermaid test she has to complete a surface air dive and perform across the length of then of the huge theater windows using her own choreography. All mermaids are required to perfect their own routine and are graded on originality and grace. They have no air hose. Did I mention that Fiona will have to deep dive rising from a depth of 117 feet in one breath? She is also required to perform a part in The Little Mermaid Show, and if they don’t get it just right, it’s back to training.

I want to thank everyone at Weeki Wachee again for their hospitality. And thank you, Andrew, for snapping that killer photo of me underwater with the mermaids. It took about ten takes, but I never doubted that Andrew would get a great shot.

If you EVER find yourself on Florida’s Gulf Coast, do not miss Weeki Wachee Springs. It is, in fact, awesome. And remember to check out the Weeki Wachee Calendar.