There is a fundamental truth that is recognized by many to be by Mark Twain (though it is doubtful Twain every said such a thing) that “If you tell the truth, you don’t have to remember anything.” In fact, while the advice is sound, the quote itself comes from Alfred Bigelow Paine’s book Mark Twain’s Notebook (1935).

However, this post is not about Mark Twain or Alfred Paine. It’s not about quotes that will be misattributed on the internet and people’s sloppy citation work. It is, in fact, about someone’s relentless harassment campaign against me and my writing, which escalated to the point of libel this week.

I won’t be maligned. I won’t be manipulated nor will I be painted in a false light. My writing has only been mine and mine alone. Ever.

This individual has not once brought forth proof of claims. Why? Because she is lying. She has lied so much on her own Twitter feed that she couldn’t possibly begin to keep her stories straight. In fact, perhaps her lies have cause some sort of bizarre time continuum because she claims that this event has caused her to not be able to write on her blog for about a month (as stated on her blog post that went live today), and she has stated through a series of tweets that she hasn’t been able to write for months, yet the blog post that she claims I stole only went live on May 7th. Not only this, she has also tweeted since May 7th how she has written several thousand words. How can it be possible that I have imposed on her in such a physics-defying degree that time has stopped for her alone, where months can pass in just two weeks and, not only that, cause such a dramatic state that she can both write thousands of words while not writing anything at all?

I am astounded by my own power.

At the same time, I am also living some other life I did not know because she claims she is also responsible for my branding. I am sure this will be an enormous surprise to the two individuals I actually did hire to design my two book covers and my Streetlights branding and website. In fact, the man responsible for my Streetlights branding and I are the only individuals who have possession of these logos.

What is also quite shocking to me is how this woman claims that I have stolen not one, but several of her blog posts. How could she possibly have discovered my nefarious scheme when I write so much poetry and she has, the last time I checked, one poem on her site? I thought for sure that writing about my children, my own mental health experiences, my own personal recovery from rape and sexual assault, and other topics that are quite specific to me would be well hidden. Sadly, no. I was clearly found out.

Or maybe the truth is this woman was only honest when she messaged me on Twitter the night my post went live and said: 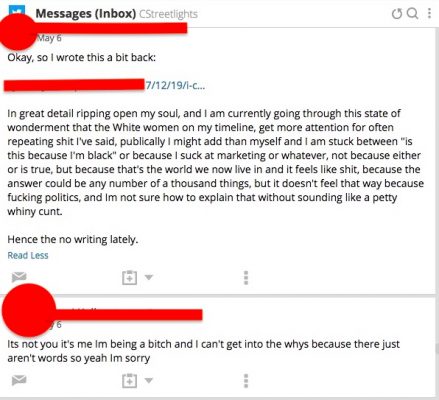 The blog post I supposedly stole, ripped off, copied, plagiarized — posted on her site in December of 2017 and I for some reason waited until May 7th to now publish (because that makes sense) — is one she says herself is written “in great detail.” She wonders why “white women in her timeline, get more attention for often repeating shit [she’s] said, publically” and wonders if it is because of her race or if it is how she markets. She admits that neither of these things are true. Most importantly, she says in her own words: “Hence the no writing lately.”

Using the CopyLeaks plagiarism checker tool that is found online, someone can compare two different texts and find out how many similar words two different documents have in common and the percentage of words that are identical. It is an excellent resource. When I ran a comparison between two blog posts, one taken from each of our websites, this was the analysis:

Zero similar words and zero percent identical. But notice what this woman is writing in her most recent post: “Someone decided it would be a really great idea to re-write several posts that I put up here… recently I’ve been seeing very similar posts pop up on another blog — similar in that the arguments made for whatever the topic might be are identical to those that I’ve made here. Similar in that it feels like something I would write, without the personal anecdotes that make these posts on this blog so personal…”

Okay, so what is really being said here is that nothing has, in fact, been copied at all, rather that she feels like that the points and arguments that I raise in my blog feel like something she would write.

Here is the analysis for the two specific blog posts in question:

You caught me! I’d be happy to go in and edit my post with a citation for these three words so that everyone knows which three words I copied.

Want some more facts? A Twitter conversation went down between me and this woman regarding men who like to fill up women’s mentions with “not all men”. This how it started:

If you were to read the blog post I published, “Men and Stickers,” you would very much see this theme throughout. If you were to read my entire blog, you would see that I do not struggle for content. I don’t need to copy from anyone, least of all this woman. My talent is not lacking.

Here’s the truth: This woman has created a narrative that she very much believes. I hope she finds a new one because this one doesn’t work. I have the facts. I have the proof. All of this — and more — has been submitted to my lawyer. She will be served and it won’t be announced ahead of time. It is in her best interest to stop thinking about me. Stop lying about me. Stop posting about me. Stop blaming me for her inability to write.

Do not ever mistake my silence as admittance to guilt or apathy. Do not think for one moment that a survivor who was once destroyed does not live again.