Life is hard, it’s even harder when you are diagnosed with a debilitating invisible illness. Once that diagnosis is given, it can feel like a life sentence. You start to work through a pattern of grief. At first, you are relieved to know that there’s a name for these symptoms that have been plaguing you. Then you feel upset, even depressed because it feels like your life, as you’ve known it, has been ripped away from you, never to be the same again. Then that same sadness turns to anger. Anger at everyone and everything. You wonder what you did to get this disease and how you are going to manage your life from this point forward. You still want the qualify of life you had before the disease hit you. You want to work, you want a family or at least be able to take care of the family you have. It’s hard to accept that you are going to have to let many of your responsibilities go and depend on others much more than you’d like to. This is the plight of many of us living with an invisible illness. Keep those thoughts in mind as you read about our guest today.

With that said…please welcome our spotlight writer: 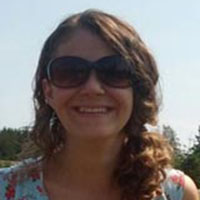 After nearly 6 months of strange symptoms, fearing I was losing my mind, and deciding more than a few times that maybe having 3 kids under 5 was just too hard for me, I finally earned my first trip to a medical specialist’s office. After a brief exam and a test that checked my vitals while in different positions, he said, “You are sick. This could be POTS, and you don’t want that.” I know now that he was right, I didn’t want to have Postural Orthostatic Tachycardia Syndrome, but unfortunately, I do.

I was a very high­-functioning person before POTS came along, so I was forced to endure a crash course in accepting help. I had to learn to love and value myself because of who I am, not because of what I can (and now can’t) do. I found it hard to discuss my illness because I didn’t want to be burden or to be marginalized, but it was impossible to be everyone’s go-­to girl any longer. I looked perfectly fine on the outside. Sometimes I would even try on purpose to look better than I felt, so I wouldn’t have to admit to anyone that I was so ill.

My invisible illness has wreaked visible havoc on my life, but there have been positive changes also. Two years ago, I decided that I couldn’t let POTS ruin our dream of having 4 children. Doctors said, “Sounds hard, but not dangerous,” and that was all we needed. About 11 months later, my last son was born. I even was granted 8 mysterious, fantastic, symptom­-free months. I am continuing to pursue new dreams in spite of POTS returning. Writing is my favorite one, please enjoy my story below of family life with invisible illness.

Rediscovering Courage through My Daughter

This year the rented beach house made up for its decades-of-sour-laundry-and-food smell and patched together interior by boasting a great exterior layout. Aside from being right on the sandy beach (a rarity near Seattle), a large deck wrapped the front and side, and both front and back yards were ample and grassy. A family-size orchard filled the back. The kids and I filled up on over-ripe peaches and plums, and we would have made it home with a bag of pears for ripening had the kids not just gnawed them all down in spite of their hardness. On the first morning, we saw deer leaving the yard while we looked back at the house from our beachcombing.

A couple of days later, our whole family and visiting friends were all inside the house gazing out the huge picture windows. A grown up spotted the deer out in the yard again. It could obviously hear our talking and the kids’ commotion through the screen door yet was drawn towards that side of the house where the plum tree was dropping its ripe fruit. “Look!” all the adults whisper-screamed to the kids. “Shhhh! There’s a deer in the front!” The children all stopped and rushed the windows. Some of them moved towards the door. “Don’t! You’ll scare it away!” In spite of our warnings, there went my four-and-a-half-year-old daughter right out the door. A few other kids hung in the doorway, but my baby girl locked her eyes on the deer and went surely, slowly towards the creature.

“Oh, my goodness! Oh, my goodness!” I frantically, but quietly said. I knew the deer wasn’t dangerous, and she was obviously somewhat tame to be that close to the house and not terrified by our clamor. Still, I imagined it rearing up on hind legs to box my daughter in the face. I’m not sure if deer even do that, but I could picture it like it was, just like a nature television show. “LYME DISEASE!” I heard in my mind. (Husband says, “That wasn’t just in your mind.”)

I quickly shut that down with a “Calm down, you weirdo. It’s not like a tick is going to leap onto her from the deer.”

I was amazed at how much conversation that Me, Myself, and I were able to have in the microseconds between my daughter’s progressing steps. “This is exactly what you would have done. Well, no. Maybe. I was a tough little girl too. Brave and never intimidated, even when I should have been” I felt a warm surge of pride begin to squeeze out my initial mommy’s knee jerk of fear. “Quit worrying,” I told myself. “Look at her! Look at your daughter! Such courage!”

The other kids, including my two sons, both older than she, were hiding behind the open screen door and watching her. We all were watching her, 4 adults, 4 kids, and the baby. Even the deer was watching her. How could we not? Such boldness and pure curiosity were mesmerizing. The scene held my gaze like nothing had in a long while. “She is so beautiful,” I kept thinking. “I wish I was still brave like that.”

As the deer tried to reach the plum tree, Hazel kept trying to get close to the deer. She reached out her hand many times. She just wanted to pet the deer, but every time she raised her arm it would startle and move away again. She never did actually get to touch it, and she was sad. No success at deer-patting; but she sure managed to wow her mother, and I could tell she was proud that she had tried.

The next day I texted one of my many poor photographs of Hazel and the deer to my parents. “It sees you,” my mom texted back. “Not me, Hazel!” I replied. “Oh, I thought that was you,” mom answered.

Hazel does look like me. We have identical cuts for our fine, chestnut, ringlet-curly hair, and I only just barely keep mine looking a little tamer than hers. Looking at the photo, I could see how my mom would have mistaken her for me, especially since my mother has more visual memories of me as a child than as an adult. Knowing that Hazel reflects me fills me with an embarrassed sense of pride. It’s like looking in a mirror and liking what you see, but better because I am her mom! I can be as proud of her as I want. Seeing that we share similar qualities humbles me. As she hopes to be like me when she takes her ballet lessons and asks if I’ll put eyeshadow on her, I hope to be like her.

You inspire me.
You are not afraid, yet.
You want to try new things.
You sing your own songs at the top of your lungs.
You take all the time in the world to dream.

I know that life will knock you around, and that kills me.
I remember feeling that the world was my oyster too.
I don’t now because, well, I guess I met too many deer that punched me in the face.
We all eventually do, and those lost dreams, those wounds, can weigh us down.

Watching you, though, that day at the beach house,
I felt the sense that I still have 4-year old me inside, my younger self that was fresh and excited.
I can still be bold, sing, and dream, and I will.
I’m not done trying to do fantastic, new things.
I want you to see me living the way we were both made to live,
With joy, bravery, companionship, and curl cream.