Kefir. You’ve probably heard of it, but you may not really know what it is, how you eat it, or why. But it is reputed to aid and cure a wide range of maladies, from acne and skin conditions, to depression and fatigue, to allergies, high cholesterol, diabetes, insomnia, and irritable bowel syndrome, among many inflammatory diseases. But what is it? And can you believe the claims? Let’s break it down.

What the hell is kefir? That’s what I wanted to know when my neighbor Perdita told me about it. Kefir is a probiotic miracle, usually made from whole fat goat or cow milk or even coconut, soy or rice milk. I’m lactose intolerant, so I usually drink almond milk instead of cow’s milk, but with a quick search you can easily find recipes for making it out of almond milk. But proponents say that the yeast and bacteria in kefir consume the lactose, leaving little behind once the kefir has been cultured.

Kefir begins with a cottage cheese looking substance called “grains.” To “grow” your own kefir, you must begin with the grains, as they contain the yeast and bacteria that transform the milk proteins and sugar into the probiotic substance that ends up looking very similar to yogurt. You can “grow” a new batch of kefir every day from the grains that can be ordered online. The grains look like pieces of coral or small clumps of cauliflower and can be tiny or bulky. They remind me a lot of tapioca. Basically, the grains kick off a fermenting process that turns the milk or milk substitute into a cultured probiotic superfood. Most kefir growers remove the grains by straining them through a plastic colander after each batch. It is important to use plastic and not metal implements when making kefir, as certain metals can damage the delicate kernels. Once made, the kefir must be refrigerated, but few growers keep many leftovers since consumption of the fresh kefir comes with the greatest benefits.

So, how exactly do you consume kefir, and importantly, does it taste gross? It tastes tart, a lot like plain yogurt, with a slightly different consistency. Some people eat it plain, but it’s a bit “fizzy” you could say, which might turn off all but the adventurous eater. Instead, you can camouflage this effect by adding it to smoothies or yogurt, or mixing it in with a variety of foods and creamy dressings, although you can’t cook it or it loses its probiotic properties. In addition to the probiotic angle, it has vitamins and minerals, notably Calcium, and amino acids. It is also an infection fighter that boosts the immune system and can activate the colon to keep everything moving along in there.

Kefir fans make a number of claims as to its wide-ranging health benefits, but hard data can be harder to find. For this I turned to a 2013 research paper published in the Brazilian Journal of MicroBiology conducted by Brazilian researchers from Instituto de Química, Universidade Federal do Rio de Janeiro, and Cidade Universitária Rio de Janeiro, RJ, Brazil. The article, “Microbiological, technological and therapeutic properties of kefir: a natural probiotic beverage,” gives a nice introduction to the history of kefir, including that the word kefir is derived from the Turkish word keyif, which literally means “feeling good,” as in, after you eat. 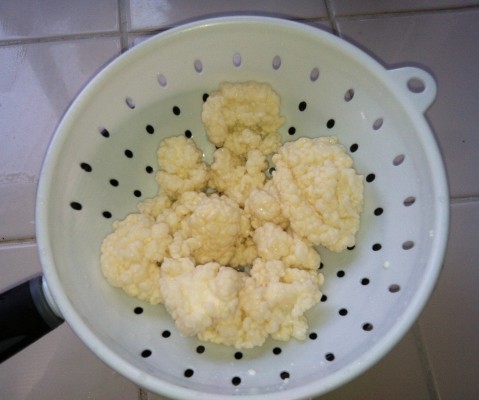 Importantly, the article found that the nature of the microorganism population prevents germs, bad microorganisms, and food pathogens from taking hold in your gut. The proportions of good microorganisms can vary depending on the fermentation process, and of course, the origin of the kefir grains, but certain microorganism groups such as Lactobacillus are present in all grains. The interesting thing is the role of yeast in the process and how complex interactions between yeast and bacteria turn the grains into an immune boosting superfood. Yeast has its own interesting history, filled with myth and lore, and it helped to create one of mankind’s oldest beverages, beer. Yeast was such a valuable commodity that it shaped the taste and texture of breads, and thus, culture, across Europe, with some strains even heavily guarded within families. Even in modern times, yeast plays a huge role in the success of regional flavor and culture, as in San Francisco, known for the production of an especially sour strain. No one knows how the ancients came up with the idea to add yeast to bread and beer, in the same way that no one fully understands the interdependence of yeast and bacteria in the formation of kefir grains. Let’s just say for now that stupidity is bliss.

Studies that prove or disprove the degree to which kefir can impact immunity and disease are difficult to conduct due to the wide range of variability in the key ingredients, the environment, and interaction with preexisting gut bacteria. It’s really one of those things you have to try for yourself. Personally, I am happy to have added to my diet any food that can potentially increase my immunity. I had pneumonia last year, and the first thing Perdita said to me when she found out is that she had a way to boost my immunity,a and I needed to do it NOW. It was kefir. Will it protect me from future illnesses? I suppose this is a wait and see proposition. My feeling is, if you already eat yogurt regularly as a snack, you may as well try kefir.

Full disclosure: As I mentioned, I am, in fact, lactose intolerant. But on the advice of friends, I started eating small amounts of yogurt a while ago. I can now eat yogurt with very little after effects, and I think it has helped my digestion issues. When I heard about kefir, I wondered if I had to worry about it causing discomfort. But what the Journal article stated turned out to be true: kefir “proved to be as effective as yogurt in reducing expired hydrogen and flatulence in lactose intolerant adults when compared to the ingestion of milk.” In other words, I can consume it without any resultant social problems. It has a nice flavor that seems somehow familiar, yet unique. It’s slightly sour like yogurt but distinct.

Are you ready to try it? I don’t suggest you run out and try to obtain the kefir grains just yet, or buy a big jug of chunky Kombucha. Start slow by trying different commercial products. I like Lifeway or Evolve brand kefir smoothies from Whole Foods, but most chain supermarkets also have a variety of products these days.