People are funny–meaning strange and unexplainable. I go through life and sometimes I build long-term treasured friendships based on commonalities in personality and interests. Or, I meet people of such a polar opposite nature that they become fascinating—kind of like messing with a rattlesnake.

I’m pretty easy going and open minded by nature. About 95% of the time, I have a good feel for what someone is all about pretty quickly. I have a list of shortcomings a mile long, but I’m usually a good judge of character. I have friends literally all over the world for which I have a great deal of respect and affection. They would be welcome in my home as I would be in theirs. They all have a spark. They all throw off good energy.

This is something I feel very fortunate for. To me, when I bite the big one, turn up my toes, shit the bed—DIE, a good part of the measure of my life would be the quality of the gathering of all of my friends and family, trapped on an isolated island for 3 days. Mine would be good. Variety would be the spice at this bash.

We all have a bubble. It surrounds us. It’s what separates us from everyone and everything else. It’s our comfort and safety zone. Your bubble starts out pretty big. It decreases in size as you get to know someone and your comfort level increases. The amount of time it takes for this to happen depends on the level of spark. Once a certain comfort level is reached, my bubble pops. It’s a great feeling, unless you let somebody con you.

Some people give energy, and some will suck it out of you until there’s nothing left of you but a dry, brittle husk if you let it go far enough. Sometimes—just don’t open the door. I just returned home from working away for a while, and I have 4 people—not good ones—trying to worm their way into my life.

My peace and feeling of well-being are so valuable—I don’t let anyone take that from me and neither should you. With Halloween just behind us, here are a few thoughts before our next trick or treaters come a knockin’—some life lessons collected over the years. I like to use the phrase: There’s a reason.

I learned some of these lessons a long time ago, some I need to be reminded of. I will share them with you now:

Don’t co-sign a loan unless it’s your kid, and then be damn comfortable that the other person and you are making the right decision. Go ahead and assume that things won’t work out as planned. Write it off, and if things work out, let it be a surprise. Helping a loved one find their way is sometimes costly but it’s what we do. If someone else other than your kid asks you to do this, it means you will more than likely be boned. If it’s an investment, weigh risk vs. return. There’s a reason.

2. Don’t take someone in 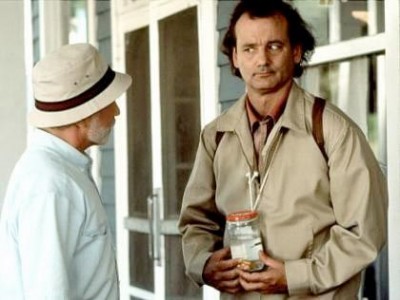 Bill Murray and Richard Dreyfuss in “What About Bob?”

Don’t take someone in—there’s a reason they are without accommodations. The exception to this can be blatant misfortune, which will occur from time to time in foreign countries. If this is not a dear friend or family member where you know the circumstances intimately, avoid this one like a plague. You will be boned. There’s a reason.

3. Don’t forget to put it in writing

Be wary when someone hesitates to put it in writing. If someone won’t sign a contract (with witnesses) when they promise you something, there’s a reason. No matter how good the potential of something appears, an agreement and a business venture are only as good as the people you are dealing with
.

Jesse Eisenberg from “Now You See Me”

Sociopaths and con artists don’t care what is good or harmful to anyone else, only what they want. Anyone who gets in the way is an obstacle, and they will be vindictive and take great pleasure in taking you apart for foiling their plans. I have experienced this. They will have outlandish stories they’ve told so many times they may almost believe them. They’ll have pictures to back up their bullshit. Usually, the pics are just fitting somehow, but not demonstrative, and if you call bullshit they tend to get nasty and split real fast. Gonna have to run one out of town on a rail later today. An easy thing to do is to let them achieve their next position by taking the time to try and process what just happened. There’s a reason your mind does not work the way a sociopath’s does. If you were baffled into momentarily agreeing to something, there is no guilt or dishonor involved in backing out. The normal person attaches honor to what they agree to, which only opens the door to the next absurd situation. Your normal reaction is that if you agreed, you are obligated to follow through but you are not.

Be very wary if your animals are leery or aggressive toward someone. They operate on the instinctual level and react accordingly. There’s a reason.

Watch the side-of-the-mouth-talkers. They’ll tell you things you don’t want to know about people you know and sometimes love, accurate or not. They’ll also use anything you tell them in a similar manner, even if taken out of context. When you see that side move, this is not a good person. There’s a reason to not tell anyone anything that you would not be comfortable with the subject person finding out. Be either concerned or constructive, or so sure that the person is such a flaming asshole that you just don’t care before saying anything.

Trust your instincts and your body’s natural reactions. If the hair on the back of your neck stands up or you get a falling feeling, or a sick feeling in your belly when walking down the street or talking to someone, there’s a reason. Listen to yourself. This is a basic survival fight-or-flight reaction that the instinctive, right side of your brain will pick up before the cognitive, left side has a chance to reason it out. When you get these feelings go on high alert.