I was the first person in my family to graduate from college. It was a huge surprise for all of us. Not because I wasn’t smart or because I wasn’t advised to continue my education. Just because I’d been an actress in NY for many years and had made great strides in my career. I knew almost all of the casting directors well and was brought in to audition for most projects. My plans were to graduate from High School and head out to Los Angeles with the rest of my performer friends. I thought this was a no-brainer. I was an actress and a successful one at that. What could I learn in college? I had great street smarts, and I knew what I wanted to pursue so why college?

My older brother went to college for two years but decided he’d hop on a career path, instead, as a salesman. He wanted money and cars and an apartment of his own. He went to John Jay Criminal College, and he wasn’t planning on becoming a Police Officer, so he jumped ship. My brother is 10 years older than me so by the time I was asked to think about college, my brother was a top salesman, driving a convertible Porsche, with an apartment and a very promising bank account. The benefits of a degree just didn’t make sense to me.

When I transferred out of an all-girls Catholic high school because of bullying and into a small alternative public high school things changed in a big way. We called the teachers by their first names. Teachers and students received the same amount of respect at Urban Academy. Give respect and get respect. We were equal, and that perspective alone changed the playing field drastically. As students, we had two 10-minute smoke breaks a day, one in the morning, and one in the afternoon. This was so the kids who smoked didn’t have to cut class and hide but instead were accepted and understood. Most of us who attended the school would not conform to traditional curriculum. We didn’t want to listen to long lectures and read worn out textbooks. We didn’t want to memorize facts and regurgitate information back out onto the test paper in front of us. We wanted to engage in conversations and listen to each others ideas. We were asking “Why?” And we were encouraged to do so in any and every environment. Youth empowerment-based education. It made me the person I am today.

In science, instead of memorizing charts and graphs, I took a class called “Horticulture.” And I grew a Venus Fly Trap, from seeds to a full functioning plant. I was interested in the Venus Fly Trap because I loved “Little Shop of Horrors” and Ellen Greene and “Suddenly Seymour” and there’s a Venus Flytrap in that play. For history, we had “Mock Trial” and researched cases and went to the courthouses downtown and wrote about our experiences. For English, I was placed in a class called “Linguistics” with a teacher named Becky. Our assignment for the semester was to create our own language with a working alphabet and by the end, we were to be able to write in the language and speak it. We had a class journal that went around the class. Each student took it home over a weekend and contributed an entry. On the weekend that I took the journal home, my dog died and so I had a lot to write. I wrote so much I finished the journal.

Becky asked me if I considered myself a writer? I said no. She observed that I liked to write. I told her I wrote letters, journal entries, and poems mostly. She encouraged me to write for the school newspaper, “Strange Brew.” I did. I also took her essay writing class and all of the other writing classes available until I graduated.

When my senior year rolled around – the staff wanted to know what colleges I was applying. I told them “None.” I let them know of my plans to go to Hollywood and continue my acting career. Becky asked me about my writing? Would I continue? I told her, “No, but maybe in journals and letters.”

The women launched into a cacophony of female voices all at once—telling me I could be pretty and smart. I could be tall and smart. I could be a girl and smart. They sat in that room with me for hours reaffirming that I deserved higher education just as much as anyone else, and they hoped that I would consider it. It was a very important experience for me. To think that they came together to tell me, as a group of strong independent woman, I was worth it. That was the sole purpose of the meeting. It really made me think.

Still the next day—I was making my plans to go to Hollywood. Becky asked me if I had ever considered Dramatic Writing. I didn’t think there was such a major. She said there was—at NYU’s Tisch School of the Arts. It was a program where I could learn how to write the movies I so much wanted to be a part of. I would also learn how to write plays and teleplays and all things dramatic. She asked me if I wanted to apply. All I needed to submit was a 25-page portfolio, typed and hand delivered by – TOMORROW. I laughed. No thanks. I did have the 25 pg. Portfolio but it was not typed and I couldn’t get it all together by tomorrow. Becky offered to type up the 25 pages, and Nadine my guidance counselor offered to pay the $40 application fee IF I agreed to hand-deliver it to NYU on time the next day. I agreed.

The following day Becky brought in the 25 typed pages as promised. Nadine signed off on the $40 application fee and my best friend Alyson and I walked to Washington Square Park. We arrived at a brownstone that had a purple flag hanging on the door. We were ready to hand over the manila envelope but were redirected to 720 Broadway, 7th Floor.

So we went, and we met a man named Mark Dickerman who was handling admissions. He took the envelope and wished me luck. I asked him how many freshman applicants they usually had. He said, “ Thousands. From all over the country.” I asked, “How many do you accept?” He said, “50.”

My Hollywood plans were back in effect, and I left NYU and any thought of it right there on the 7th floor with Mr. Dickerman.

In the Spring, I came home from school to a thin envelope from NYU. I opened it alone in my kitchen while leaning against the sink. It read:

“We would like to thank you for your interest in our Dramatic Writing Program at Tisch School of the Arts NYU. After careful consideration, by our staff, of your portfolio, we would like to inform you that you have been officially accepted to our incoming Freshman Class. More information will follow pending your response. We are very excited to work with you and look forward to meeting you in the Fall.” 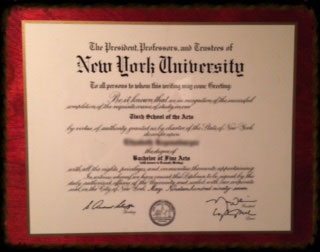 I finished the undergrad program with a 3.9 GPA. I graduated with honors, and a BFA in Dramatic Writing and a minor in sociology. AND – I was one of 5 students pre-selected to attend a one year accelerated Masters Program. I met the criteria of having maintained a GPA over 3.5 for all 4 years. I finished my undergrad program in 8 consecutive semesters, and I was nominated by three staff members.

All 5 nominees accepted, including me. By the 3rd week of the Fall semester, 4 dropped out. I graduated the following Spring with an MFA. I was officially a Master of Fine Art.

Had it not been for my willingness to travel uncharted, and unplanned territories – who knows.

Here’s to educators who care more about the students than the test scores. It only takes one person to come into your life and change the rest of your story … for the better.